Cheng is from Hei Long Jiang province, in China. In 2010, his cousin returned to China for a holiday during her studies in Tasmania. It was at this time that she convinced Cheng’s parents to send him to Tasmania to complete High School prior to commencing his university studies. 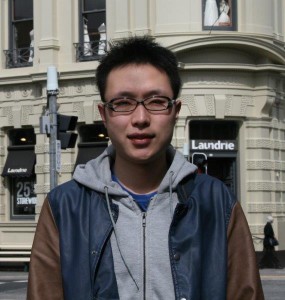 He studied a range of subjects and became immersed in the culture of Tasmania. He notes that his English language skills have improved greatly since arriving in Tasmania. He credits this to studying in classes with local students, making local friends, and having a supportive homestay mother to teach him about language and culture. “I couldn’t speak English when I arrived, but when I made friends, I would say hello and then learn from listening to them.”

Cheng’s hard work at Launceston College paid off; he completed Year 12 in 2011 with an Australian Tertiary Admissions Ranking of 96.5, and is now studying a Bachelor of Marine Engineering at the University of Tasmania’s Australian Maritime College. It was the beautiful ocean scenery of Tasmania’s Wineglass Bay and Bruny Island that inspired Cheng to study Marine Engineering rather than his original plan of Mechanical Engineering. He is currently completing his degree and hopes to work in Tasmania upon graduation in 2015.

Cheng loves his life in Tasmania. “Tasmania is beautiful – I love the environment and the people are very friendly. I work part-time, play Badminton twice a week and I’m a member of the Chinese Student Association in Launceston”. Cheng strongly suggests that students begin their education in Tasmania before University, and live in a homestay environment. “It is a good idea to practice English and learn new skills before commencing university”.

Cheng loves his life in Tasmania. Before arriving in Launceston, Cheng always assumed that he would return to China after completing university. He now knows that he wants to live in Tasmania for the rest of his life: “I just want to stay here. For me it’s perfect. I love the lifestyle and the environment of Australia.”